We recently received a letter from someone whose lives were saved because they were using a Sarca Anchor. Read their story here. 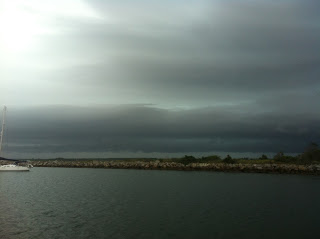 I love storms. I have never been afraid of lightning and thunder, and I’ve even been quoted as saying that I can never get enough rain.
So when I woke up from a late arvo nap in the aft cabin to the rumble of approaching thunder, I anticipated a good light show and the possibility of filling our water tanks. I yawned my way into the salon, which held too few people.

We’re anchored in our home town at the moment, a couple of hundred metres from my parents’ house. As anchorages go, you couldn’t ask for more. There’s an encircling rock breakwall that protects the bay from the main current of the Clarence River and knocks down any swell. We’d dropped the pick in muddy sand with a couple of metres under the keel and felt conservative in letting out 25 metres of chain. There was a beneteau parked about eighty metres away, our friends on Santana beyond them and a few cats further up the bay. We’d become complacent very quickly, going from checking the weather three times a day to … not at all.

I went up on deck and saw a long dark front approaching from the south. There were clothes and towels hanging on every available bit of railing, the cockpit covers (known as clears) were unpacked but not zipped up, and the tender was over on the beach. I rang my Dad.

“Can you send Budi back to get us? I’m just going to put the clears up but I reckon we can make it to shore before it hits.” I looked back over my shoulder. “Tell him to run.”
He ran. He was back at the boat in less time than it took me to unroll the clears and start to puzzle out which one of the damn things went where. In our six months of cruising up the Queensland coast we’d had exactly two days of heavy rain.

“Help me get these up!” I said, and he did his best, but both of us were defeated by the zips on the two back panels. I was very aware that Yamba had disappeared in a wall of white. The wind started to pick up and the first drops of rain started to fall. We kept flipping the clears over and trying them on different sides but the best I could do was to zip them together in the middle and sides and leave the tops drooping down.

“Should I get a roll of duct tape and we can just tape them up?” asked Budi. His father’s son.
“Get all that stuff off the railings!” I shouted at Rems. The southern end of the bay had disappeared and I knew we weren’t going to make it to shore.
Rems grabbed armfuls of clothing and chucked them down into the cockpit. “Come on!” she said, above the rising wind. “We can still make it!”
“Everyone go below!” I shouted. “Go go go go!”
And then, five minutes after I’d woken to that rumble of thunder, the storm hit.
I’d wanted Miles there because I knew he knew how to put the clears up and that he’d stop the cockpit from getting doused in water. I’d wanted him there so that there was an extra pair of adult hands to run around and secure stuff on deck. But as soon as that storm hit, I wanted him there because I thought it was very likely that we were all about to get creamed on the rocks and drown.

The wind hit us like a train and heeled us over more than we’ve ever heeled sailing. I was dimly aware that things were flying around the galley, but I was braced in the cockpit and trying to keep my balance on the sloping floor. Everything around me went white and the noise of the wind, rain, and hail was so loud it was like being inside a waterfall. Hail and rain were flinging into the cockpit through the droopy clears and I was wet through in seconds. I felt the elastic stretch of the chain as the wind yanked us away from the anchor. The kids were terrified. I was terrified, and always, when I’m that scared, I can rely on Miles to take control of everything and maintain a calm and cheerful exterior which allows me to curl up in some corner and mutter to myself, I’m a teapot, I’m a teapot. But he wasn’t there.

“One for fun!” I shouted down to the kids, and one of them (whichever of them that wasn’t cuddling Sylvie, who was sobbing, “we’re going to die, we’re going to die!”) raced to the battery isolator so I could start the engine. I turned the key but the storm was so loud I couldn’t tell if the engine had turned over. “Instruments!” I shouted, and some amazing child switched on the instruments, while dodging the two laptops that went flying from the nav station onto the galley floor as the wind whipped us around the other way and met us straight in the face. We had two surfboards on deck that we’d used the day before but not gotten around to tying back down. The shortboard, in its white board cover, was lifted off the deck and flew straight over the cockpit roof. The 9’3 mal juddered around on deck. Rems was beside me and cried out but I didn’t give a rat’s arse about the surfboards. I just wanted to know if our anchor was holding and if the wind was going to knock us all the way over.

Within moments the chart plotter was telling me that we weren’t dragging, but as I looked around I couldn’t orientate myself. I’d catch a glimpse of a tree or the rock wall, and then the boat would slew sideways again and I’d lose sight of everything.
“We’re not dragging!” I shouted down to the kids. “It’s okay, we’re going to be fine. Call Poppy and tell him we’re all right!”
“Mum!” shouted Reminy. “That boat should not be there!”
The beneteau was suddenly right beside us.
“Oh God,” I said. “We’re not dragging but he is!”
He slid past us and into the white.

Scraps of the world started to come back in, the wind was dropping and we were heeling less. “It’s only 30 knots now!” I shouted down to Budi and Sylve. ‘We’re okay.’
“Look at those two boats!” said Rems.

Through the driving rain we could just make out a complicated blur, which turned out to be a cat and a motor boat butting up against each other on the shallow side of us.
“We’re okay, Poppy,” I could hear Budi saying to my dad. “We lost a surfboard and there’s pears all over the floor but we’re not dragging. Everybody else is.”
Within five more minutes the wind had backed off to ten knots and the rain had cleared enough for us to see where how we were lying, and how everyone else was faring. Our friends on Santana who incidentally have the same awesome anchor (Excel) as us hadn’t budged an inch but had been visited by a different cat as well as a big power boat, both of which had dragged more than a hundred metres. The beneteau was aground on a sand bank near the entrance to the bay; another cat had dragged its brand new mooring right up to the shark nets at the end of the bay, a hobie cat was entangled in the nets, there were two kayaks (and a surfboard?) floating around in the bay, and just outside the entrance a houseboat containing a family of seven and their three dogs had flipped over.

In twenty more minutes the bay was glassy and the sun was out. Our chart plotter recorded a maximum wind speed of 56 knots, but it was only after the front hit that our instruments were turned on. More experienced sailors than me reckon 60-65 knots.

What I learned from this experience:
1. We can trust our anchor. We all felt such affection for our anchor after the storm that we’ve decided to name it. Budi’s petitioning for Holder, and Reminy (who has been reading Patrick Ness) likes The Anchor Of Never Letting Go.
2. We can trust our boat. She’s sturdy, she’s safe, she’s reliable, she’s awesome.
3. If Miles had been on board I would have fallen apart instead of having an empowering near death experience*.
4. We can trust our kids. Reminy said afterwards, “I was so scared I couldn’t even cry or scream; the only thing I could do was follow instructions.” They were scared, but they held it together (except Sylvo, but even she snapped out of it as soon as I told her there were hail stones in the cockpit that she could eat.)
5. I only love storms when I’m living in a house, when all you have to do to prepare for a storm is shut the windows.
6. We need to check the weather, three times a day.
Liss

p.s. A nice man picked up our surfboard and left it under a tree. It sustained no damage.
Pps. It turned out that the beneteau only dragged because one of the Wandering Cats dislodged their anchor as they wandered by. The beneteau motored off the sand bank an hour or two after the storm, when the tide came in.
Ppps. All seven people on the houseboat got out safely, and so did the three dogs.
* I’m prone to hyperbole, off the page as well as on it. I know we weren’t really near death. 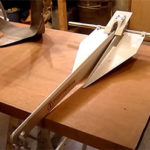 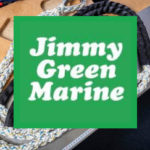 Jimmy Greene Marine We recently received a letter from someone whose lives were saved because they were using a Sarca Anchor. Read their story here. I love storms. I have never been afraid of lightning and thunder, and I’ve even been quoted as saying that I can never get enough rain. So when I woke up from a […]

Join us at the Sanctuary Cove Boat Show We recently received a letter from someone whose lives were saved because they were using a Sarca Anchor. Read their story here. I love storms. I have never been afraid of lightning and thunder, and I’ve even been quoted as saying that I can never get enough rain. So when I woke up from a […]
View All News
Our Videos
View our videos about the revolutionary SARCA anchor.
View All
Anchor Right 2021 © All Rights Reserved Another website made with
Close X